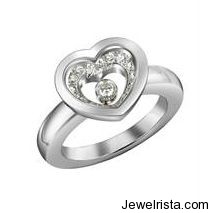 A tradition of Excellence
It all began in 1860 in Sonvilier, at the heart of a region renowned for the quality of its watchmakers. Here Louis-Ulysse Chopard established his workshop and his watches quickly gained a solid reputation and found buyers as far as Russia and Scandinavia.

In 1920, the founder’s grandson Paul-André Chopard moved the company to Geneva. In 1963 he sought a buyer capable of perpetuating the brand’s rich heritage, since none of his sons wished to take over the company. This was when he met Karl Scheufele, descendant of a dynasty of watchmakers and jewellers from Pforzheim, Germany. After a brief meeting, Karl Scheufele decided to buy the company.

With the Scheufele family, Chopard experienced a spectacular development. Renowned for its creativity, technology and excellence, it became one of the leading names in the highclass watch and jewellery industry. Karl Scheufele and his wife Karin have orchestrated the company’s international development for more than 40 years and are still active in the firm. Their two children are its current co-presidents: Caroline handles the ladies’ collections and jewellery, while her brother Karl-Friedrich manages the men’s collections and the Chopard Manufacture in Fleurier.