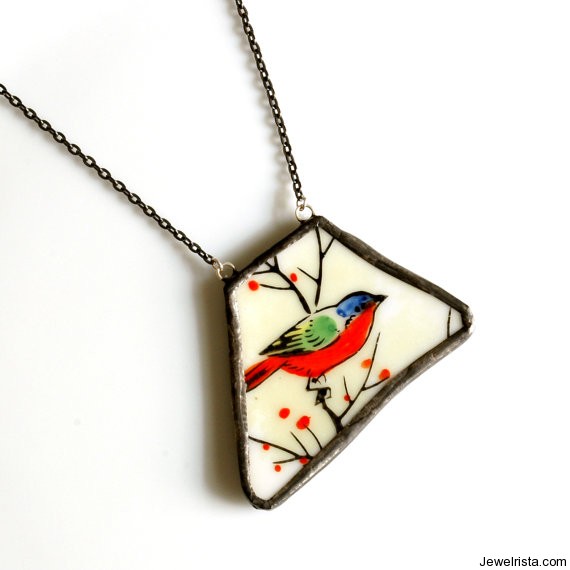 Juliet Ames is a Baltimore, MD crafter who has enjoyed getting her hands dirty and making things since she was a small child. While she played with Lego’s and Play-Doh she would have never dreamed that one day she would break plates for a living!

As an Inter-Disciplinary Craft major at Towson University, Ames took a peculiar mix of classes that exposed her to many different mediums from metal to glass to paper. After graduating in 2005 she decided to learn about the non-profit world of art and took a job at a local arts council. While surrounded by creative people at work, Ames couldn’t stay away from crafting for long! Inspired by her colleagues she dove back into the creative waters headfirst.

Juliet’s first new project was a simple, mosaic that repurposed all of the plates she had collected from thrift shops over the years. When the mailbox was complete, Ames was left with a pile of broken plate shards that were begging for a new life. She wrapped one in solder and made a pendant out of it. The public demand for more pendants grew, and thus, The Broken Plate Pendant Co. was born. With encouragement from her friends in the crafting community, Ames attended her first craft show in November, 2006. She’s been hooked on breaking plates ever since! 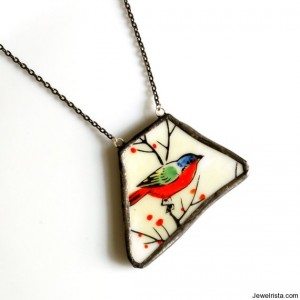 The Broken Plate Pendant Co. has evolved to cater to more custom work, but breaking unique, vintage dishes is still the foundation of the business. Ames soon discovered that broken plate shards hold a lot of sentimental value for many people. Her job has become incredibly rewarding, as she transforms broken pieces of a shattered family dish or wedding plate into wearable heirlooms for a client’s family.

Ames’ work has been featured in magazines such as Readymade, Real Simple, Smart Woman, Urbanite, Baltimore Magazine, Style and more. Broken Plate Pendants are currently in wardrobe at the Rachael Ray Show and the Food Network’s 30 Minute Meals.